This game has 11 reported Temporal Dark Patterns. There are 9 votes indicating the absense of a dark pattern.


1 votes
2 votes
Playing by Appointment -
1 / 2 votes
Being forced to play according to the game's schedule instead of yours.

This game has 11 reported Monetary Dark Patterns. There are 18 votes indicating the absense of a dark pattern.

This game has 2 reported Social Dark Patterns. There are 19 votes indicating the absense of a dark pattern.


1 votes
2 votes
Fear of Missing Out -
1 / 2 votes
If you stop playing you'll miss out on something or be left behind and unable to catch up.


1 votes
2 votes
Competition -
1 / 2 votes
The game makes you compete against other players.

This game has 10 reported Psychological Dark Patterns. There are 8 votes indicating the absense of a dark pattern.


1 votes
2 votes
Invested / Endowed Value -
1 / 2 votes
Having already spent time and money to improve your status in the game, it's difficult to throw it away.

Artificial Scarcity reported on May 25, 2022

Frequent "deals" and "offers" pop up in various forms

Frequent optional competitions. After playing all level packs, competition is the only game mode.

Bends expectations by claiming to imitate a real game of chance. Arrangements of varying difficulty occur with unknown frequency and pattern.

Complete the Collection reported on May 25, 2022

Many forms of reward for arbitrary accomplishments. Award systems are often nested via multiple in-game currencies

The cost in in-game currency to play a level increases at an unequal rate to the rewards given hourly.

Playing by Appointment reported on May 25, 2022 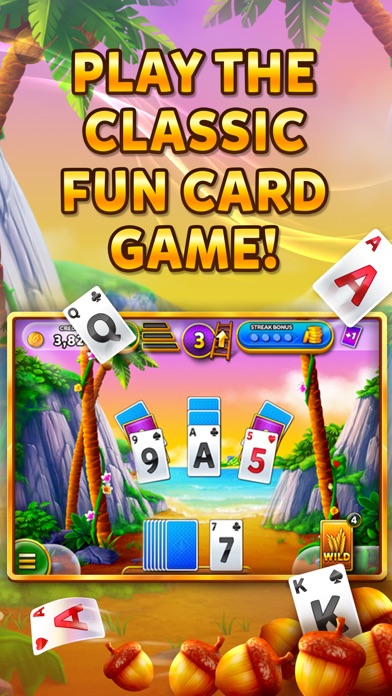 - Join the fun - get farming and card-flipping as both your crops and your coins grow as you play fun tipeaks solitaire card games!
- Clear each levels on every field as you flip your cards and harvest your crops. It’s fun, it's FREE - and the most rewarding free tripeaks solitaire game you’ve ever played!

This isn't one of your standard tripeaks solitaire games - this is Solitaire - Grand Harvest tripeaks!

Need for more awesome solitaire bonuses? SPIN the BONUS WHEEL for extra tripeaks solitaire bonuses including FREE coins, EXTRA cards, FREE solitaire rounds and EXTRA harvests! In a tight spot? Use your coins for WILD cards - got a long card streak you don't want to break? Use a WILD card and play any card in its place!

Get SOCIAL and Get REWARDED!
Tripeaks solitaire games are even more fun with friends!
- Get 10,000 FREE COINS when you invite your friends to play their own tripeaks farming solitaire games - send them a link or Facebook invite to have them join the tripeaks farming fun - then watch them make their way around their own farms, or send them some solitaire cards!
- Go VIP: Harvest, farm, and card flip your way to VIP tripeaks solitaire levels and earn exciting rewards - but be warned, you’ll need to harvest and think strategically!

Your crops and cards are waiting for your harvest, and these tripeaks solitaire games won't play themselves! Swing by the farm, flip your cards, and download one of the most exciting solitaire games of all: play Solitaire - Grand Harvest tripeaks now!