This game has 63 reported Temporal Dark Patterns. There are 68 votes indicating the absense of a dark pattern.


15 votes
4 votes
Wait To Play -
15 / 4 votes
In-game timers that make you arbitrarily wait for something.


4 votes
14 votes
Playing by Appointment -
4 / 14 votes
Being forced to play according to the game's schedule instead of yours.


19 votes
Advertisements -
0 / 19 votes
Forced to watch ads or given rewards for watching ads.

This game has 95 reported Monetary Dark Patterns. There are 105 votes indicating the absense of a dark pattern.


5 votes
14 votes
Pay to Win -
5 / 14 votes
A player can spend real money to purchase something that gives them an advantage in the game.


6 votes
12 votes
Anchoring Tricks -
6 / 12 votes
Placing a cheap item next to an expensive item to make it look more affordable.


2 votes
17 votes
Accidental Purchases -
2 / 17 votes
Making it easy to accidentally spend money with no confirmation or ability to undo or refund the action.


18 votes
Recurring Fee -
0 / 18 votes
Encourages players to play as much as possible to get their money's worth.

This game has 34 reported Social Dark Patterns. There are 98 votes indicating the absense of a dark pattern.


18 votes
1 votes
Fear of Missing Out -
18 / 1 votes
If you stop playing you'll miss out on something or be left behind and unable to catch up.


6 votes
13 votes
Social Obligation / Guilds -
6 / 13 votes
To avoid letting down your friends, you are obligated to play when you don't want to.


3 votes
16 votes
Social Pyramid Scheme -
3 / 16 votes
You get a bonus for inviting your friends and then they have to invite their friends.


1 votes
18 votes
Competition -
1 / 18 votes
The game makes you compete against other players.


19 votes
Encourages Anti-Social Behavior -
0 / 19 votes
The game incentivizes players to lie, cheat, or backstab other players to get ahead.

This game has 49 reported Psychological Dark Patterns. There are 82 votes indicating the absense of a dark pattern.


18 votes
Invested / Endowed Value -
18 / 0 votes
Having already spent time and money to improve your status in the game, it's difficult to throw it away.


6 votes
13 votes
Complete the Collection -
6 / 13 votes
The urge to collect all the items, achievements or secrets in a game.


3 votes
16 votes
Badges / Endowed Progress -
3 / 16 votes
Reluctancy to abandon a partially completed goal, even one forced upon the player.


2 votes
17 votes
Illusion of Control -
2 / 17 votes
The game cheats or hides information to make you think you're better than you actually are.


19 votes
Optimism and Frequency Biases -
0 / 19 votes
Overestimating the frequency of something because we’ve seen it recently or memorably.

The game has a central currency called Saint Quarts. Their primary use is summoning servants, but can be used to replenish energy and give you a second chance. They do cost money, but are abundantly available to gain through just playing the game.

Yes, because I take pride in the work I have put into the game. Just the same as you would a console game you’ve nearly finished.

You can borrow other players' characters and lend yours out as well. Actually a good system, it lets you help newer players and borrow characters you like instead of gambling for them. (You can basically leech off whales) Also, it has separate setups for normal gameplay and event gameplay unlike most in-game support functions.

It's a story-based gacha. The idea, from a financial/business standpoint, is to make you invested in the characters so you spend absurd amounts of money trying to obtain and level them.

There is always more story, more grind, or more events.

Complete the Collection reported on Oct 17, 2022

By nature of being a "Wife/Husband" type of game, it encourages you to try and obtain all of your favorite, most-definitely-rare characters.

Purchasing FGO's premium currency allows you more chances to roll good units. This includes what are considered the best, high-rarity servants (who may only have a 0.8% to 1% chance to show up, depending on the banner) and lower-rarity units who still require multiple copies to work well. 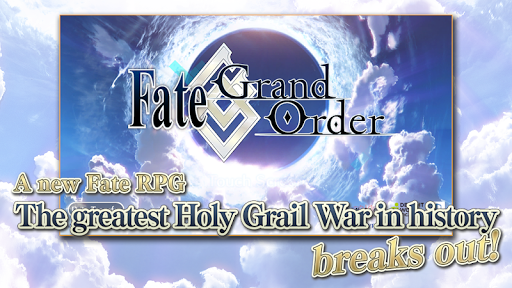 A new mobile "Fate RPG," presented by TYPE-MOON!
With an impressive main scenario and multiple character quests,
the game features millions of words of original story!
Packed with content that both fans of the Fate franchise and newcomers will be able to enjoy.

2017 A.D.
Chaldea, an organization tasked with observing Earth's future, has confirmed that human history will be eliminated at 2019.
Without warning, the promised future of 2017 disappeared.
Why? How? Who? By what means?
AD. 2004. A certain provincial town in Japan.
For the first time ever, a region that could not be observed appeared.
Assuming that this was the cause of humanitys extinction, Chaldea carried out its sixth experiment - time travel into the past.
A forbidden ceremony where they would convert humans into Spiritrons and send them back in time. By intervening in events, they would locate, identify, and destroy the space-time Singularities.
The mission classification is an order to protect Humanity: Grand Order.
This is the title for those who would take a stand against human history and battle fate in order to protect mankind.

A command card battle RPG optimized for smart phones!
Players become Masters and together with Heroic Spirits, defeat enemies and solve the mystery of human history's disappearance.
It's up the players to form a party with their favorite Heroic Spirits - both new and old.

Smartphones or tablets with Android 4.1 or higher and 2GB or more RAM. (Incompatible with Intel CPUs.)
*It is possible that the game will not work on some devices, even with the recommended version or higher.
*Incompatible with OS beta versions.