This game has 5 reported Temporal Dark Patterns. There are 13 votes indicating the absense of a dark pattern.


1 votes
2 votes
Wait To Play -
1 / 2 votes
In-game timers that make you arbitrarily wait for something.

This game has 11 reported Monetary Dark Patterns. There are 9 votes indicating the absense of a dark pattern.

This game has 2 reported Social Dark Patterns. There are 13 votes indicating the absense of a dark pattern.

This game has 4 reported Psychological Dark Patterns. There are 7 votes indicating the absense of a dark pattern.

There are missions within the game, that once completed, go on a timer which the player can skip or decrease by watching an ad

Eggs can be found by playing the game, and when hatched offers a random pet. Purple eggs can be purchased with premium currency and hatch instantly, opposed to the regular red eggs.

When your dragon dies, text saying 'Save me!' appears with the option to revive your dragon.

This game has no competitive play but you can purchase (for absurd amounts of money for a single unit. Like 80$ Which is claims is a limited time “discount” on a digital unit. ) 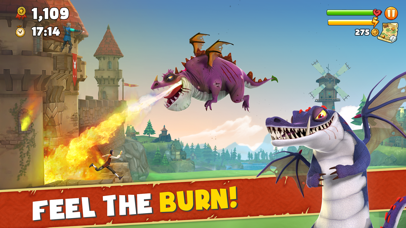 Unleash fiery fury from above in Hungry Dragon, a fun and frantic flying action game where everything and everyone is on the menu!
Control ferocious dragons and fly, burn and eat your way through a medieval world packed with legends, monsters and deliciously unsuspecting prey!

***This game is only compatible with devices running on iOS 9.1 or above***

RELEASE THE DRAGONS
• Collect ferocious flying fire-breathing Dragons, each unique in their own way
• Unlock crazy Costumes to fly faster, burn bigger, and eat more
• Equip exotic Pets and weird creatures to boost your power
• Level up and train by feasting on townsfolk, monsters and other delicious prey

FEEDING FRENZY
• Fly through, explore and destroy a world of villages, forests, hills, and Goblin City!
• Smash through obstacles to access hidden areas in the world
• Feed on more for a higher score – Hungry Dragons are never satisfied!

FEEL THE BURN
• Go on a grilling spree in a huge free-roaming world in epic 3D
• Activate Fire Rush and release an inferno incinerating all in your path!
• Roast a medieval feast of monsters, soldiers, trolls, witches, and much more

UNLEASH THE LEGEND
• Evolve and train Legendary Dragons - strange hybrid monsters and dinosaurs
• Unlock epic special powers – the more you train, the crazier the power!
• Become a legend by competing in Legendary Leagues to defeat friends and foes!