This game has 27 reported Temporal Dark Patterns. There are 48 votes indicating the absense of a dark pattern.


3 votes
8 votes
Playing by Appointment -
3 / 8 votes
Being forced to play according to the game's schedule instead of yours.


3 votes
6 votes
Can't Pause or Save -
3 / 6 votes
The game does not allow you to stop playing whenever you want.


2 votes
9 votes
Wait To Play -
2 / 9 votes
In-game timers that make you arbitrarily wait for something.


11 votes
Advertisements -
0 / 11 votes
Forced to watch ads or given rewards for watching ads.

This game has 32 reported Monetary Dark Patterns. There are 89 votes indicating the absense of a dark pattern.


9 votes
2 votes
Recurring Fee -
9 / 2 votes
Encourages players to play as much as possible to get their money's worth.


6 votes
5 votes
Pay to Win -
6 / 5 votes
A player can spend real money to purchase something that gives them an advantage in the game.


11 votes
Accidental Purchases -
0 / 11 votes
Making it easy to accidentally spend money with no confirmation or ability to undo or refund the action.


11 votes
Anchoring Tricks -
0 / 11 votes
Placing a cheap item next to an expensive item to make it look more affordable.

This game has 26 reported Social Dark Patterns. There are 49 votes indicating the absense of a dark pattern.


9 votes
1 votes
Competition -
9 / 1 votes
The game makes you compete against other players.


4 votes
7 votes
Encourages Anti-Social Behavior -
4 / 7 votes
The game incentivizes players to lie, cheat, or backstab other players to get ahead.


3 votes
8 votes
Social Obligation / Guilds -
3 / 8 votes
To avoid letting down your friends, you are obligated to play when you don't want to.


1 votes
10 votes
Fear of Missing Out -
1 / 10 votes
If you stop playing you'll miss out on something or be left behind and unable to catch up.


11 votes
Social Pyramid Scheme -
0 / 11 votes
You get a bonus for inviting your friends and then they have to invite their friends.

This game has 32 reported Psychological Dark Patterns. There are 43 votes indicating the absense of a dark pattern.


9 votes
2 votes
Invested / Endowed Value -
9 / 2 votes
Having already spent time and money to improve your status in the game, it's difficult to throw it away.


7 votes
4 votes
Badges / Endowed Progress -
7 / 4 votes
Reluctancy to abandon a partially completed goal, even one forced upon the player.


5 votes
5 votes
Complete the Collection -
5 / 5 votes
The urge to collect all the items, achievements or secrets in a game.


1 votes
10 votes
Illusion of Control -
1 / 10 votes
The game cheats or hides information to make you think you're better than you actually are.


1 votes
10 votes
Optimism and Frequency Biases -
1 / 10 votes
Overestimating the frequency of something because we’ve seen it recently or memorably.

i mean, the collection log has not been completed by anyone in the last 20 years

After unlocking them Zeffs Staffs, the Flax trade, Ogre Arrows and some more are daily refreshed

only when playing group ironman

i have a firecape, this guy dosnt, therefore my account is better

1v1 me at multi for bank, source: trust me bro 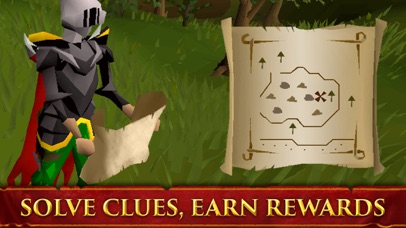 Explore Gielinor in the iconic MMORPG now on Mobile!

"Still one of the best and biggest sandbox MMOs around, and it's only gotten better with age. There's simply nothing else like it." – PC Gamer

Old School RuneScape is RuneScape how you used to know. It was first released in 2013 and is based on RuneScape as it was way back in 2007. It’s the only MMORPG in the world that is shaped by its players, with developers releasing new, regular content that has been voted for by the fans!

The world's largest and most popular MMORPG, Old School RuneScape has been played by over 260 million players since the 2001 release of RuneScape. Old School RuneScape unites the intricate mechanics of modern MMOs with the nostalgic point-and-click gameplay of early role-playing games.

FANTASTIC SUBSCRIBER BENEFITS
Old School RuneScape is free-to-play but there are lots of advantages to becoming a subscriber! Subscribers get access to:
• A world map that’s 3x larger
• 8 additional skills
• Loads more quests
• 400 extra bank account slots
• And lots, lots more, all for one monthly cost!

CROSS-PLATFORM GAMEPLAY
Adventure anywhere with an innovative cross-platform approach to mobile gaming, which is truly revolutionary among MMORPGs. Whether you play with mobile or desktop, you’ll be playing on the same account on the same game worlds.

COMMUNITY LED
In Old School RuneScape players decide what new content to vote on. If a proposal is voted for by 75% or more of players, then the developers will add it to the game!
Over 1,000 questions have been polled since Old School RuneScape was released in 2013. That's over 1,000 decisions players have made to help shape the game.

CHOOSE YOUR OWN PATH
Play as the lone adventurer seeking glory through individual challenges, or band together with other heroes to leave your mark on the game. With 23 skills to master, hundreds of lore-filled quests, and dozens of unique raids and bosses to defeat, Old School RuneScape has a challenge for everyone.

EXPLORE GIELINOR
Be the first to traverse Fossil Island and uncover its lost history. Map the heated tropics of the Karamjan jungle, and brave the barren wastes of the Kharidian desert.

HUNDREDS OF QUESTS
Old School RuneScape's many lore-rich quests combines epic puzzles and enchanting narrative with the nostalgic humour of point-and-click adventures. Rediscover the secret to rune magic, uncover the mystery behind the devastating plague in West Ardougne, or help Yanni Sallika with just one small favour...

We are working hard to deliver a great experience for all of our players but if you are experiencing login or account recovery issues please check the Support Centre page, dedicated to issues Mobile players may have: https://jgx.game/WelcomeBack

Your subscription will be charged to your iTunes account, or at the end of your trial period if eligible. Subscriptions will automatically renew unless cancelled within 24-hours before the end to the current period. You can cancel anytime with your iTunes account settings. Any unused portion of a free trial will be forfeited if you purchase a subscription.