This game has 70 reported Temporal Dark Patterns. There are 21 votes indicating the absense of a dark pattern.


13 votes
Daily Rewards -
13 / 0 votes
Encourages return visits every day and punishes you for missing a day.


13 votes
Grinding -
13 / 0 votes
Being required to perform repetitive and tedious tasks to advance.


12 votes
1 votes
Playing by Appointment -
12 / 1 votes
Being forced to play according to the game's schedule instead of yours.


11 votes
2 votes
Wait To Play -
11 / 2 votes
In-game timers that make you arbitrarily wait for something.


5 votes
8 votes
Can't Pause or Save -
5 / 8 votes
The game does not allow you to stop playing whenever you want.

This game has 98 reported Monetary Dark Patterns. There are 39 votes indicating the absense of a dark pattern.


13 votes
Pay to Win -
13 / 0 votes
A player can spend real money to purchase something that gives them an advantage in the game.


9 votes
3 votes
Accidental Purchases -
9 / 3 votes
Making it easy to accidentally spend money with no confirmation or ability to undo or refund the action.


10 votes
2 votes
Anchoring Tricks -
10 / 2 votes
Placing a cheap item next to an expensive item to make it look more affordable.


1 votes
11 votes
Recurring Fee -
1 / 11 votes
Encourages players to play as much as possible to get their money's worth.

This game has 42 reported Social Dark Patterns. There are 44 votes indicating the absense of a dark pattern.


13 votes
Social Obligation / Guilds -
13 / 0 votes
To avoid letting down your friends, you are obligated to play when you don't want to.


12 votes
Fear of Missing Out -
12 / 0 votes
If you stop playing you'll miss out on something or be left behind and unable to catch up.


13 votes
Competition -
13 / 0 votes
The game makes you compete against other players.


2 votes
10 votes
Encourages Anti-Social Behavior -
2 / 10 votes
The game incentivizes players to lie, cheat, or backstab other players to get ahead.


1 votes
11 votes
Social Pyramid Scheme -
1 / 11 votes
You get a bonus for inviting your friends and then they have to invite their friends.

This game has 62 reported Psychological Dark Patterns. There are 23 votes indicating the absense of a dark pattern.


12 votes
1 votes
Invested / Endowed Value -
12 / 1 votes
Having already spent time and money to improve your status in the game, it's difficult to throw it away.


10 votes
2 votes
Badges / Endowed Progress -
10 / 2 votes
Reluctancy to abandon a partially completed goal, even one forced upon the player.


10 votes
2 votes
Complete the Collection -
10 / 2 votes
The urge to collect all the items, achievements or secrets in a game.


8 votes
4 votes
Optimism and Frequency Biases -
8 / 4 votes
Overestimating the frequency of something because we’ve seen it recently or memorably.


5 votes
7 votes
Illusion of Control -
5 / 7 votes
The game cheats or hides information to make you think you're better than you actually are.

Playing by Appointment reported on Jan 4, 2020

Yes and they refuse to refund if you do

Daily grinding! But when you are 2/3 shards off from taking your character to the next star rank farming becomes hard, as no shards drop for awhile! Whereas before farming for character shards was easy

Meta team after meta team. One new team counters the one before

New characters are locked behind a pay wall for about a week until these characters are released to everyone. So if you brought the ‘deals’ before the release then you have the advantage.

Playing by Appointment reported on Oct 23, 2019

Daily arena without option to change hour. Daily Alliance War and 2 raids, all manually played on top of Blitz. Forced to play all or fall behind. So much worse than SWGOH or Dragon Champions 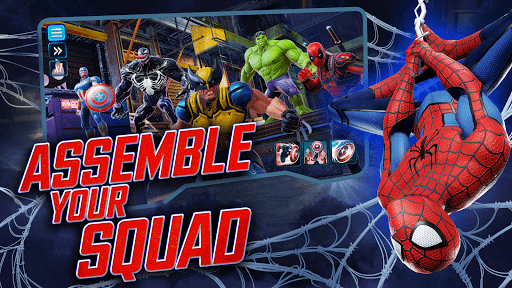 In MARVEL Strike Force, ready for battle alongside allies and arch-rivals in this action-packed, visually-stunning free-to-play game for your phone or tablet. An assault on Earth has begun and Super Heroes and Super Villains are working together to defend it! Lead the charge by assembling your ultimate squad, including Spider-Man, Doctor Strange, Groot, Rocket Raccoon, Loki, Venom, Elektra, Captain America and Iron Man, as you enter strategic combat against an all-new enemy threat. Its time to fight! Gather your squad and prepare for the battle to save Earth!

STRENGTH THROUGH EVOLUTION
Outfit and upgrade your Super Heroes and Super Villains to become stronger than ever before.

STRATEGIC DOMINATION
Who you bring to the fight matters. Pair up specific Super Heroes and Super Villains to perform combo moves to take out enemies. Expert in-fight tactics in 5v5 battles give you the power to vanquish the greatest villains of the Marvel Universe.

STUNNING VISUALS
Play one of the most visually stunning mobile game experiences that has ever been released. Your Marvel Super Heroes and Super Villains look as close to life-like as possible on your phone!

We may work with mobile advertising companies and other similar entities that help deliver advertisements tailored to your interests. For more information about such advertising practices, and to opt-out in mobile apps, see http://marvelstrikeforce.com/privacy-policy#ads. You may also download the App Choices app at www.aboutads.info/appchoices.