There is a progression component where new ability cards are unlocked through playing. I don't consider the progression to be overly grindy though, and unlocked abilities increase in complexity, not just overt power.

There is a set of achievements that can be unlocked through gameplay.

Complete the Collection reported on Feb 4, 2022

There is a game mode that can only be unlocked by collecting all of the ability cards, but collection is accomplished through normal gameplay, not monetization or excessive grinding. 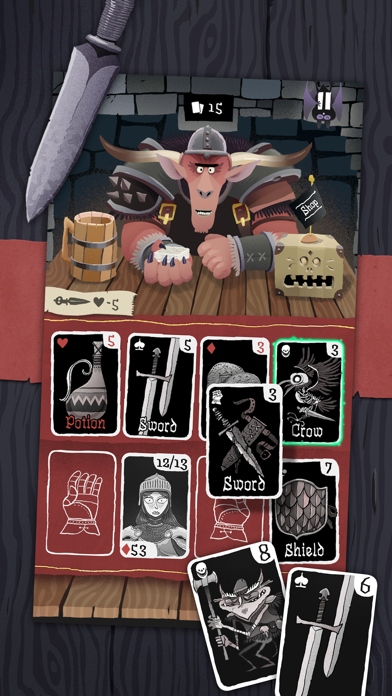 Card Crawl is a solitaire-style dungeon crawler game played with a modified deck of standard cards.

Clear the dungeon of 54 cards by using item-cards, slaying monsters and managing your limited inventory. On each run, you can use five ability-cards (mini deck building) to gain unique skills. By collecting gold, you can unlock 35 more ability-cards to access new tactics and even higher scores.

Card Crawl’s four single-player game modes are enhanced by Game Center to let players compare their scores and the associated decks. A typical game lasts two or three minutes and is a perfect “one more game” experience while waiting in line or commuting.

"A brilliant distillation of the dungeon crawler, Card Crawl is well worth a look." — Pocketgamer

"Card Crawl is an enjoyable, casual card game that feels a touch like Diablo-Meets-Solitaire." — 148Apps

"There’s something about a solitaire card game that really does it for me, and Card Crawl is one of the best I’ve played."
— Pockettactics

"It's got great art, gameplay with cards that isn't like other card-based dungeon crawlers and is perfect for sitting back and relaxing while playing it." — Toucharcade

"Taken purely as a variation on Solitaire, Card Crawl is clever as heck, with a standout style and simple yet rewarding gameplay." — JayIsGames

"It’s a unique and interesting hybrid that plays out very well. If you love dungeon crawlers and card games like Hearthstone, then this is a no-brainer." — AppAdvice

"The most intriguing thing about Card Crawl is its simplicity."
— MACNN

"Card Crawl is an impressively solid card game that borrows what works from other games and spins it into its own, unique, game." — Gamezebo

"Card Crawl is really creative and unique game, in which strategy and luck is equally needed." — iPlayApps

"Card Crawl is easily suited for anybody who loves casual short game." - ModernJamming