This game has 3 reported Temporal Dark Patterns. There are 32 votes indicating the absense of a dark pattern.


5 votes
Playing by Appointment -
0 / 5 votes
Being forced to play according to the game's schedule instead of yours.


5 votes
Daily Rewards -
0 / 5 votes
Encourages return visits every day and punishes you for missing a day.


5 votes
Can't Pause or Save -
0 / 5 votes
The game does not allow you to stop playing whenever you want.


5 votes
Wait To Play -
0 / 5 votes
In-game timers that make you arbitrarily wait for something.

This game has 0 reported Monetary Dark Patterns. There are 55 votes indicating the absense of a dark pattern.


5 votes
Pay to Win -
0 / 5 votes
A player can spend real money to purchase something that gives them an advantage in the game.


5 votes
Accidental Purchases -
0 / 5 votes
Making it easy to accidentally spend money with no confirmation or ability to undo or refund the action.


5 votes
Recurring Fee -
0 / 5 votes
Encourages players to play as much as possible to get their money's worth.


5 votes
Anchoring Tricks -
0 / 5 votes
Placing a cheap item next to an expensive item to make it look more affordable.

This game has 0 reported Social Dark Patterns. There are 35 votes indicating the absense of a dark pattern.


5 votes
Social Pyramid Scheme -
0 / 5 votes
You get a bonus for inviting your friends and then they have to invite their friends.


5 votes
Social Obligation / Guilds -
0 / 5 votes
To avoid letting down your friends, you are obligated to play when you don't want to.


5 votes
Encourages Anti-Social Behavior -
0 / 5 votes
The game incentivizes players to lie, cheat, or backstab other players to get ahead.


5 votes
Fear of Missing Out -
0 / 5 votes
If you stop playing you'll miss out on something or be left behind and unable to catch up.


5 votes
Competition -
0 / 5 votes
The game makes you compete against other players.

This game has 12 reported Psychological Dark Patterns. There are 20 votes indicating the absense of a dark pattern.


3 votes
1 votes
Complete the Collection -
3 / 1 votes
The urge to collect all the items, achievements or secrets in a game.


2 votes
3 votes
Invested / Endowed Value -
2 / 3 votes
Having already spent time and money to improve your status in the game, it's difficult to throw it away.


2 votes
3 votes
Badges / Endowed Progress -
2 / 3 votes
Reluctancy to abandon a partially completed goal, even one forced upon the player.


5 votes
Illusion of Control -
0 / 5 votes
The game cheats or hides information to make you think you're better than you actually are.


5 votes
Optimism and Frequency Biases -
0 / 5 votes
Overestimating the frequency of something because we’ve seen it recently or memorably.

contains minor ads if you wanted to be revived or receive extra gold.

achievement system for foing something that can unlock weapons or extra gold.

Complete the Collection reported on Jan 17, 2023

urge to collect every weapon and talismans.

has a mini loot box (no need to pay for anything) after beating bosses.

On mobile versions, there is an option to watch an ad for a revive or bonus coins.

Various unlockables and upgrades can be achieved by playing the game, which can take a long time to collect.

Speaking personally, I spent as much time playing this as I did more to fulfill the urge to clear the game's many achievements than because I thought the gameplay was fun.

Complete the Collection reported on Jan 17, 2023

Clearing achievements also unlocks items, characters, and upgrades, further encouraging players to play more to unlock all of them. 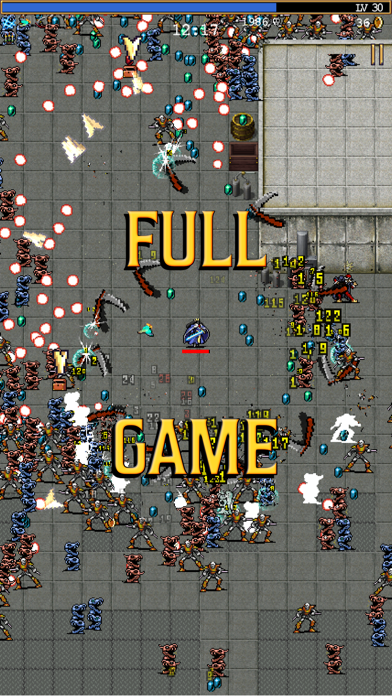 The supernatural indie phenomenon that lets you be the bullet hell has arrived on mobile!

Hell is empty, the devils are here, and there's no place to run or hide. Survive as long as you can until death inevitably puts an end to your struggles. Gather gold in each run to buy upgrades and help the next survivor.

Mow down thousands of night creatures and survive until dawn! Vampire Survivors is a gothic horror casual game with roguelite and roguelike elements. Your choices can allow you to quickly snowball against the hundreds of monsters that get thrown at you.

Test your mettle against the legions of hell using your touchscreen. This wave survival will bring you the edge!

Stand against hordes of enemies, exterminate monsters and finish the game as a lone survivor! There is no way to defeat an enemy army without a collection of great weapons. This roguelike game has it all. Cross, garlic, king bible or magic wand? The choice is yours.

Upgrade your skills and become a warrior with unlimited potential. Take the most out of this hero survival - battle evil and dangerous hell creatures without mercy!

- Take your time to grab gems and items, they won't disappear.
- Get two or three offensive weapons at first, but focus on leveling them up one at a time.
- Armour and Luck are good starting power-ups to spend money on.
- Refund power-ups often, it's free, and try new upgrade paths.

Waves of undead legions are all around, have you thought it’s going to be easy? The challenge is what makes this one of the best horde survival games. It’s time to enjoy an exciting rouge survival adventure.

Explore different stages and learn how to slay enemies anywhere, whether that is library, dairy plant, or old capella. Roguelite skill experience will help you collect bonuses and find treasure. You don’t want to be the last survivor with an empty pocket, do you?

Select your favorite character and begin the best adventure roguelike game of your life.

Join the fans of this roguelike RPG game on Twitter and TikTok:

We’re only just getting started. Expect improvements and enhancements as we continue to refine the mobile experience in Vampire Survivors roguelite role playing game.