This game has 0 reported Temporal Dark Patterns. There are 35 votes indicating the absense of a dark pattern.


5 votes
Playing by Appointment -
0 / 5 votes
Being forced to play according to the game's schedule instead of yours.


5 votes
Daily Rewards -
0 / 5 votes
Encourages return visits every day and punishes you for missing a day.


5 votes
Grinding -
0 / 5 votes
Being required to perform repetitive and tedious tasks to advance.


5 votes
Advertisements -
0 / 5 votes
Forced to watch ads or given rewards for watching ads.


5 votes
Can't Pause or Save -
0 / 5 votes
The game does not allow you to stop playing whenever you want.


5 votes
Wait To Play -
0 / 5 votes
In-game timers that make you arbitrarily wait for something.

This game has 0 reported Monetary Dark Patterns. There are 55 votes indicating the absense of a dark pattern.


5 votes
Pay to Win -
0 / 5 votes
A player can spend real money to purchase something that gives them an advantage in the game.


5 votes
Accidental Purchases -
0 / 5 votes
Making it easy to accidentally spend money with no confirmation or ability to undo or refund the action.


5 votes
Recurring Fee -
0 / 5 votes
Encourages players to play as much as possible to get their money's worth.


5 votes
Anchoring Tricks -
0 / 5 votes
Placing a cheap item next to an expensive item to make it look more affordable.

This game has 0 reported Social Dark Patterns. There are 35 votes indicating the absense of a dark pattern.


5 votes
Social Pyramid Scheme -
0 / 5 votes
You get a bonus for inviting your friends and then they have to invite their friends.


5 votes
Social Obligation / Guilds -
0 / 5 votes
To avoid letting down your friends, you are obligated to play when you don't want to.


5 votes
Encourages Anti-Social Behavior -
0 / 5 votes
The game incentivizes players to lie, cheat, or backstab other players to get ahead.


5 votes
Fear of Missing Out -
0 / 5 votes
If you stop playing you'll miss out on something or be left behind and unable to catch up.


5 votes
Competition -
0 / 5 votes
The game makes you compete against other players.

This game has 2 reported Psychological Dark Patterns. There are 29 votes indicating the absense of a dark pattern.


2 votes
2 votes
Badges / Endowed Progress -
2 / 2 votes
Reluctancy to abandon a partially completed goal, even one forced upon the player.


5 votes
Invested / Endowed Value -
0 / 5 votes
Having already spent time and money to improve your status in the game, it's difficult to throw it away.


5 votes
Illusion of Control -
0 / 5 votes
The game cheats or hides information to make you think you're better than you actually are.


5 votes
Optimism and Frequency Biases -
0 / 5 votes
Overestimating the frequency of something because we’ve seen it recently or memorably. 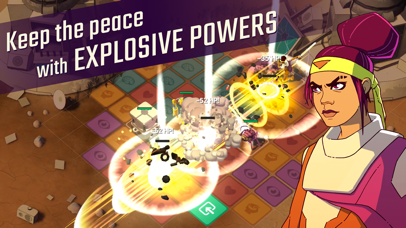 A distant planet. A dying colony. A deadly conspiracy. Fight a corrupt system in Ticket to Earth, the revolutionary tactical puzzle RPG!

The mining boom has left New Providence to die and just one Earth-bound ship remains. Forced to fight to protect everything she loves, orphaned Rose stands between bloodthirsty marauders and a corrupt government.

The puzzle grid is your battlefield as you position your team, collect matching tiles, and power up devastating special abilities. You’ve never played anything like this!

BATTLEFIELD TACTICS - Select your team, position them around the battlefield, get them in the right spot to deal the most damage!

TILE-MATCHING PUZZLE - Seek out the right path across a vividly-colored grid to amass mystical energy and power up your attacks!

STORY-DRIVEN RPG - Manage and customize your team’s powers and gear as you explore a vivid sci-fi world full of unique characters!

Join the fight in Ticket to Earth, a sci-fi tale of betrayal and insurrection.

- "Ticket To Earth is an evolutionary leap forward in the puzzle/RPG hybrid genre" – Kotaku
- "...one of the first truly essential mobile games of the year" – 9/10 Pocket Gamer
- "Ticket To Earth tricked me into enjoying a puzzle game" – Rock, Paper, Shotgun
- "A superbly original and exceptionally presented colour matching tactical game" – 5/5 Pocket Tactics

This epic science fiction saga is being told across four episodes, and all four are included in the price of the game. Episodes 1, 2 and 3 are out now, with more than 100 unique missions and hours of tactical RPG gameplay. Episode 4 is coming soon!

For more information about the game, visit www.ticket-to-earth.com