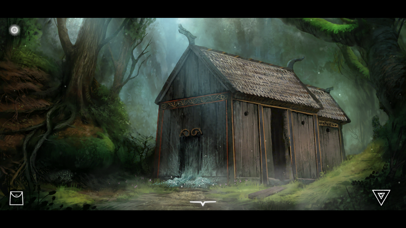 "The Frostrune is everything a classic point-and-click puzzler should be, and there's really not much else to be said. It's an utter joy to play through, and a genuine must-have for lovers of the genre."
- 9/10, Pocket Gamer

Unravel a mystery inspired by Viking myth and legend in The Frostrune, a classic point-and-click adventure based on ancient Norse culture and environments.

Find yourself shipwrecked on an island after a summer storm. Nearby, a recently abandoned settlement shows signs that its inhabitants left in a panic. Surrounding the village is a dark, dense forest filled with ancient rune stones and burial mounds. Among them are hidden relics and other well-kept secrets that will bring you closer to solving the mysteries of the island.

" The Frostrune speaks for itself and stands out amongst its competitors as a crowning achievement in the point & click genre. For those who enjoy playing Point-and-Clicks or those interested in Vikings or Norse lore, this is an experience well worth getting." - Matthew White, Opnoobs. 9/10

The Frostrune is made by game developers who are passionate about Norse culture and history. We have taken extra care to make The Frostrune as authentic and historically accurate as possible.

Rich Story
The Frostrune embraces the Nordic tradition of storytelling: One filled with magic, myth and wonder common in Viking lore. 2 - 5 hours of immersive gameplay.

Challenging Puzzles
Through exploring the rich environment, you will unravel the mystery of the deserted island. Use the objects that you collect to solve puzzles on your journey of discovery.
Two to five hours of gameplay.