Healthy Games NETFLIX Into the Breach

NETFLIX Into the Breach

This game has 0 reported Psychological Dark Patterns. There are 3 votes indicating the absense of a dark pattern. 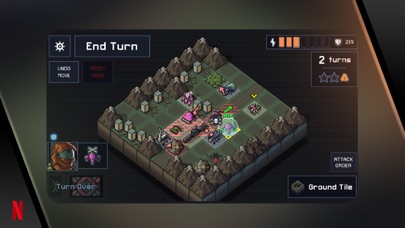 Civilization is in peril, and it's up to you to defend it. Lead a team to save the world from alien threats in this turn-based strategy game.

The remnants of human life are threatened by giant creatures breeding beneath the earth. Carefully choose your squad of powerful pilots and mechs to protect your territory. Each attempt to engage the enemy presents a new challenge in this futuristic combat game, which PC Gamer named Ultimate Game of the Year in 2018.

• Defend cities: Civilian buildings power your mechs. Defend the structures from the enemy and watch your fire!
• Perfect your strategy: Enemy attacks are telegraphed in minimalistic, turn-based battles. Analyze your opponent's attack and come up with the perfect counter every turn.
• Build the ultimate mech: Find powerful new weapons and unique pilots as you fight alien infestations across multiple islands.
• Another chance: Failure is not an option. If you're defeated, send for help back through time to save another timeline.
• Advanced edition content: This newly expanded version of the game includes advanced weapons, mechs, pilots, enemies, missions and more.