This game has 14 reported Temporal Dark Patterns. There are 0 votes indicating the absense of a dark pattern.


2 votes
Advertisements -
2 / 0 votes
Forced to watch ads or given rewards for watching ads.


2 votes
Can't Pause or Save -
2 / 0 votes
The game does not allow you to stop playing whenever you want.

This game has 15 reported Monetary Dark Patterns. There are 5 votes indicating the absense of a dark pattern.


2 votes
Accidental Purchases -
2 / 0 votes
Making it easy to accidentally spend money with no confirmation or ability to undo or refund the action.

This game has 10 reported Psychological Dark Patterns. There are 4 votes indicating the absense of a dark pattern.


2 votes
Illusion of Control -
2 / 0 votes
The game cheats or hides information to make you think you're better than you actually are.

Pausing during matches doesn't usually work properly. It usually kicks you back to home screen.

AI cheats in certain modes by triggering procs or abilities more frequently than they should and by moving at the last second in modes where positioning is important.

Complete the Collection reported on Apr 29, 2021

It's impossible to 100% the catalog because of how early events worked, but there are small collections that were introduced this season. Collect certain cards in a tier to get a random card from the one above.

Achievements that provide small rewards are released with each tier.

Yes, cards that cost $50+ eventually drop in rarity over time until they become obsolete, then are eventually taken out of nearly all active play.

The shop is all loot boxes.

The option to buy additional draft picks is right next to the button to continue.

Timers for bouts in all event modes and PVP. Additional wait time in some event modes if you lose matches of up to an hour. King of the Ring takes more than a day to complete. 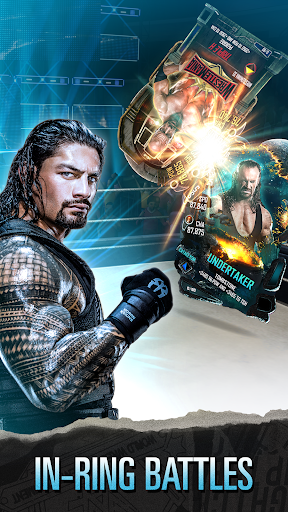 Collect and level up thousands of cards featuring WWE Superstars Ronda Rousey, Seth Rollins, AJ Styles, Brock Lesnar, and many other fan favorites like The Rock, Goldberg, Stone Cold Steve Austin, Aleister Black, and more. Crush your foes in real-time PvP fighting game and climb the leaderboards. Earn exclusive rewards in limited time competitions. Form a team and compete against others in tests of strategy. Plus, battle in Monday Night Raw, SmackDown Live, and NXT arenas.

Prove your wrestling chops in Open Challenges and compete head-to-head with other WWE fans to become a WWE SuperCard champion. WWE SuperCard has entertained millions (and millions!) of WWE fans across the globe.

Introducing Season 5! WWE SuperCard S5 will include 3 new tiers with more than 75 new Superstar cards in each, a new and improved multi-fusion chamber, and more!