This game has 13 reported Temporal Dark Patterns. There are 3 votes indicating the absense of a dark pattern.


2 votes
Advertisements -
2 / 0 votes
Forced to watch ads or given rewards for watching ads.


1 votes
1 votes
Can't Pause or Save -
1 / 1 votes
The game does not allow you to stop playing whenever you want.


1 votes
1 votes
Wait To Play -
1 / 1 votes
In-game timers that make you arbitrarily wait for something.

This game has 22 reported Monetary Dark Patterns. There are 7 votes indicating the absense of a dark pattern.


2 votes
1 votes
Accidental Purchases -
2 / 1 votes
Making it easy to accidentally spend money with no confirmation or ability to undo or refund the action.

This game has 15 reported Social Dark Patterns. There are 6 votes indicating the absense of a dark pattern.


3 votes
Social Obligation / Guilds -
3 / 0 votes
To avoid letting down your friends, you are obligated to play when you don't want to.


2 votes
1 votes
Encourages Anti-Social Behavior -
2 / 1 votes
The game incentivizes players to lie, cheat, or backstab other players to get ahead.

This game has 16 reported Psychological Dark Patterns. There are 4 votes indicating the absense of a dark pattern.


2 votes
1 votes
Illusion of Control -
2 / 1 votes
The game cheats or hides information to make you think you're better than you actually are.

Happens on the "Sets", it's limited timed and lets you have one free spin daily but lets you do more buy paying using gems, this leads to the user buying more gems.

They give you a deal of buying a overpowered weapon along with some currency.

The most clans in this game requires you to battle with the clan, otherwise you would be kicked.

This happened to me, I accidentally pressed a lootbox and spent my tickets I were collecting up for the Battle Pass upgrade.

The game is filled with loot boxes. Not just that, but the loot boxes have besides valuable items also items with much lesser value, or even no value, such as useless skins (which proven to have a suspicious high chance of being obtained). All that makes your grinding worthless, and encourages you to grind again.

Near all of the things you can get are time limited, although they still may or may not appear again.

Little animations featuring the new weapons, in the game. Visual effects such as shining + characters with expressive emotions for offers in the store.

The common set of "money for currency" from 1$ to 100$, every new offer in the store comes with several more of the same, but each more valuable and expensive. + Fake discounts, every offer appears with a "discount" and "old price", with the "old price" sometimes ranking up to a ridiculous 1000$. 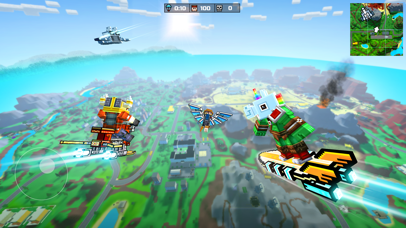 In Pixel Gun 3D you have a perfect chance to battle with your friends, classmates and colleagues or anyone else all around the world! You can create and customize your character using a special skins maker and then show off on the battlefield!

*** CAMPAIGN ***
Pixel Man has found himself in an awful situation ... In the middle of the night tonnes of frightening zombies come to attack his farm unexpectedly! Later on, he figures out that the zombies don't just wander through his village, they are everywhere! Will he be able to survive and figure out the reason for the Zombie Apocalypse? Stay with him until the end and solve the whole mystery of the world of Pixel Gun 3D!

*** SURVIVAL ARENA ***
A separate set of conditions that allow you to check your survival skills. How far are you willing to go? How many waves of monster attacks can you overcome?

SURVIVAL MODE FEATURES:
• Endless gameplay.
• Unexpected combinations of different kinds of monsters.
• Awards for getting through to the next stage.
• Get the best results you can and compare them to your friends!

*** FRIENDS AND CLANS SYSTEM ***
If you made friends with someone while chatting in the battlefield, then all you both have to do is press the [ + ] button in the game table and you will become friends! And then you can quickly find and team up with your friends for new matches, look at their accomplishments, how their characters are made up and so much more!
Also, you can create your own CLAN made up only of the best players. Be the strongest Pixel warriors in the world.

*** SKINS AND CAPES MAKER ***
Now you can make your OWN SKIN and USE IT IN THE MULTIPLAYER GAME!
You can also turn on a function for a custom cape. Design it yourself using whatever patterns you want!

Thank you for all the comments and advice, we really appreciate it. In this version, we tried to fulfill your wishes. Wait for the coming updates with cool new features!

Pixel Gun 3D is the most popular multiplayer game in many countries!

Join the exciting world of Pixel Gun 3D!
——————————————————
This is not an official Mojang app. Pixel Gun 3D & Cubic Games are not associated or connected with Mojang AB. Minecraft is a trademark of Mojang AB and it is not endorsed by or affiliated with the creator of this game or its licensers.