This game has 401 reported Temporal Dark Patterns. There are 308 votes indicating the absense of a dark pattern.


102 votes
11 votes
Playing by Appointment -
102 / 11 votes
Being forced to play according to the game's schedule instead of yours.


4 votes
74 votes
Wait To Play -
4 / 74 votes
In-game timers that make you arbitrarily wait for something.

This game has 354 reported Monetary Dark Patterns. There are 292 votes indicating the absense of a dark pattern.


111 votes
3 votes
Anchoring Tricks -
111 / 3 votes
Placing a cheap item next to an expensive item to make it look more affordable.


9 votes
3 votes
Recurring Fee -
9 / 3 votes
Encourages players to play as much as possible to get their money's worth.


5 votes
7 votes
Accidental Purchases -
5 / 7 votes
Making it easy to accidentally spend money with no confirmation or ability to undo or refund the action.


1 votes
117 votes
Pay to Win -
1 / 117 votes
A player can spend real money to purchase something that gives them an advantage in the game.

This game has 416 reported Social Dark Patterns. There are 321 votes indicating the absense of a dark pattern.


102 votes
3 votes
Fear of Missing Out -
102 / 3 votes
If you stop playing you'll miss out on something or be left behind and unable to catch up.


102 votes
Competition -
102 / 0 votes
The game makes you compete against other players.


123 votes
7 votes
Social Obligation / Guilds -
123 / 7 votes
To avoid letting down your friends, you are obligated to play when you don't want to.


81 votes
6 votes
Encourages Anti-Social Behavior -
81 / 6 votes
The game incentivizes players to lie, cheat, or backstab other players to get ahead.


4 votes
96 votes
Social Pyramid Scheme -
4 / 96 votes
You get a bonus for inviting your friends and then they have to invite their friends.

This game has 369 reported Psychological Dark Patterns. There are 271 votes indicating the absense of a dark pattern.


80 votes
2 votes
Invested / Endowed Value -
80 / 2 votes
Having already spent time and money to improve your status in the game, it's difficult to throw it away.


110 votes
5 votes
Badges / Endowed Progress -
110 / 5 votes
Reluctancy to abandon a partially completed goal, even one forced upon the player.


7 votes
70 votes
Complete the Collection -
7 / 70 votes
The urge to collect all the items, achievements or secrets in a game.


5 votes
93 votes
Optimism and Frequency Biases -
5 / 93 votes
Overestimating the frequency of something because we’ve seen it recently or memorably.


4 votes
84 votes
Illusion of Control -
4 / 84 votes
The game cheats or hides information to make you think you're better than you actually are.

there are occasional times (events?) where this is offered like reboot rallies

rarely, but yes; to certain games and certain creatives or content creators, usually in collaboration events.

You can buy levels/ranks, notably makes unlocking items on the 'battlepass' easier and quicker

Yes but in the sense of "here is more ammo / healing items / etc. I have since you're low" each match if you're playing non-solo

Trading items in the PVE part of the game.

Specific gamemodes are build with this idea in mind.

Battlepasses from years ago aren't available anymore, boosting the price of my account. I can sell it for a higher price compared to newer accounts.

Contains offers than can be purchased and have a limited time in the shop, some with real money that offer a skin that may or may not be released 200-3000 days from now.

Wait times for daily challenges and if you spend most of your time getting exp from custom games the exp is nerfed after prologue play of custom games. 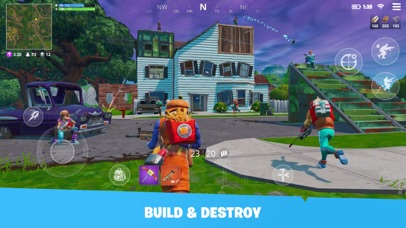 Fortnite has come to mobile! Squad up and compete to be the last one standing in Battle Royale, or use your imagination to build your dream Fortnite in Creative.

Requires an internet connection and iOS 11 or above.

On mobile, Fortnite is the same game you know from PlayStation 4, Xbox One, PC, Mac, Switch. Same map, same gameplay, same weekly updates. Build your fort as you battle to be the last one standing. Jump in and squad up with friends around the world or in the same room!

CREATIVE - Enter a universe of endless creative possibilities. Play games with your friends and explore countless community creations. Head to the Creative hub to check out new featured Islands every day.

BUILD & DESTROY - Shape the battlefield by building your own cover. Opponent hiding behind a wall? Take out their cover to get the edge.

GEAR UP - Board the battle bus and drop in on your favorite zone. Gather resources, collect gear, and battle your opponents! Last one standing wins.

SQUAD UP WITH FRIENDS - Team up with your friends around the world or in the same room!

CONSOLE GAMING ON THE GO - Play the full game anytime, anywhere. Complete quests on the go, progress your Battle Pass, and more.