This game has 14 reported Temporal Dark Patterns. There are 4 votes indicating the absense of a dark pattern.

This game has 18 reported Monetary Dark Patterns. There are 8 votes indicating the absense of a dark pattern.

This game has 5 reported Social Dark Patterns. There are 11 votes indicating the absense of a dark pattern.


1 votes
2 votes
Competition -
1 / 2 votes
The game makes you compete against other players.

This game has 13 reported Psychological Dark Patterns. There are 4 votes indicating the absense of a dark pattern.

Playing by Appointment reported on May 30, 2022

Multiple quests that require you to log in after an exact duration has passed (exact times = 4 hours 10 mins, 9 hours 33 mins, 21 hrs 51 mins) and you can only be off by ~5 minutes. Skills with diminishing returns that make you check anywhere from multiple days to every 30 minutes. Buffs that punish you if you idle too long (any gains received after the 10-hour mark are withheld from you). Lack of inventory space means if you idle too long, 90% of your gains can't be picked up.

Many features of the game have 24-hr reset timers (shops, skills, bars that fill up). You don't have to necessarily play every day, but if you take too long to come back, the game has bugs that make it freeze when you try to collect too much loot.

Dev literally plans to make a feature for end-game players to "infinitely grind."

Artificial Scarcity reported on May 30, 2022

There is always a limited time offer in the shop.

There are free ones in the game, but you can spend money for "AFK gain candies" that let you collect a certain hour amount of idling gains. 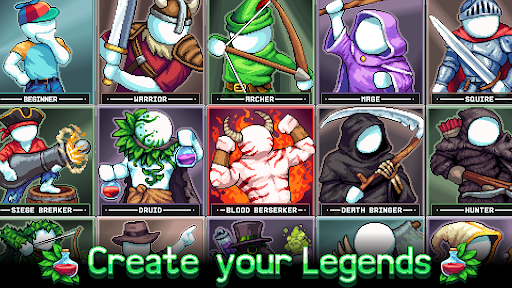 [Releasing November 8th]
Legends of Idleon is a 2d Idle MMO, where you build your own guild of unique characters, who all work together to gather resources, craft items, and defeat bosses!

At first, you'll create characters for mining, smithing, and fighting monsters, but as you complete each World, MORE skills will unlock -- like fishing, alchemy, construction -- which all give bonuses across all your entire guild! And of course, you'll be specializing new characters into each of these new skills!

Eventually, you'll be controlling dozens of characters, all with unique classes, equipment, and abilities that YOU chose! Each one will work while you're Offline too, so progression never stops!

GAME FEATURES --------
* 22 unique classes to specialize into!
Maybe you'll make a Barbarian Fisherman who catches the best fish, for your Druid Alchemist to make permanent potions, that boost the critical damage of your Hunter Assassin so he can defeat the World Boss!

* 100% character control!
You get to move around as your characters, and personally interract with the world in meaningful ways! Will you spend your time completing quests, or finding hidden secrets for bonus abilities?

* Idle Gains, all the time!
Your characters continue working where you left them, no matter how long you're away for! 20 hours, 500 hours? Your characters have ALL been working the ENTIRE time, and you'll come back to MASSIVE GAINS!

In-Depth Gameplay:
Lets say your Battle Mage can't defeat the world boss. Go on your Mining warrior and collect some Iron and Gold ore. Using your Guild Storage chest, transfer the ores to your Smithing Bowman, who can craft new weapons for your Battle Mage to go wreck that boss!
Beating a boss unlocks the next world, which has a new set of different activities to learn and master. Eventually, there are dozens of activities, and you have 14 different characters you're micromanaging in order to progress through each world, which only makes things more and more complex! The more you play, the more activities you'll find, and the more characters you'll be managing! This loop goes on for a few months or so until I add new content.


CONTENT LIST:
* Train and customize 20+ unique characters
* Spend points in 300 unique Talent Abilities!
* Level up 12 unique Skills -- Mining, Smithing, Alchemy, Fishing, Woodcutting and more!
* Talk to 50+ NPC's, all with hand-drawn animations
* Witness first hand the mental decline of the developer that went to the trouble of making this game all by themself! And, since I am that developer, might I also say he is very cool ;)
* Complete 200+ unique quests, some of which are pretty dang easy and others are just crazy hard!
* Craft 120+ unique Equipment, like Helmets, Rings, uh, weapons... you know, all the normal stuff in RPGs
* Brew 40 different Cauldrons Bonuses, and collect over 50 Vials and Stamps!
* Talk with other REAL people! Kind of like how I'm talking to you right now, except you'll get to talk back!
* Get HYPED for new content coming in the future by joining my discord at: Discord.gg/idleon
* Yo man, life is too short to spend reading entire Mobile Game descriptions like this one. You made it this far, so you either REALLY need to go download the game, or you just scrolled down to the bottom out of curiosity to see whats here. If so, there's nothing here except a smiley face with a nose :-)