This game has 2 reported Temporal Dark Patterns. There are 0 votes indicating the absense of a dark pattern.

This game has 4 reported Monetary Dark Patterns. There are 0 votes indicating the absense of a dark pattern.

This game has 2 reported Social Dark Patterns. There are 0 votes indicating the absense of a dark pattern.

Game gives multiple quests per day (some locked behind a paywall) in order to progress in the battle pass. The battle pass itself is also atrocious as the best possible reward the free path gives might be around 5k gold, while you would need 30k to level a fighter to the next important level. All cosmetics and advertised rewards are locked behind the paid path.

There have been 2 new fighters, that are 'obtainable from chests' but the currency requirement for them are too much, and it is also a small cahnce to get 1 shard if the fighter, while unlocking it requires 30 shards.

In order to level up a fighter, you need to spend 30k gold. You get a total of 12 gold per fight, 50 gold per common chest and 1k gold per rare chest. You can also buy gold for real money.

Everything is a lootbox, and they will intentionally give you vad ones to keep you spending.

Every previous fighter is unable to defeat a max level new fighters, as they have too many mechanics.

Complete the Collection reported on Sep 11, 2022

You are urged to play the game and spend money, as that is the only way you can enjoy playing their new fighters.

The game has occasional events with minor free gifts which can save over 100 hours of grinding. It about half the reviewers paycheck.

The game is a PvP fighting game with atrocious frame data with 90% moves being plus due to the immense stagger one gets for blocking an attack. 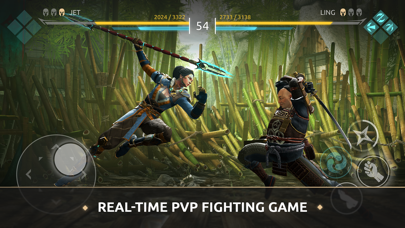 BRAND NEW SHADOW FIGHT GAME!
Compete with friends or anyone around the world in a real-time PvP by playing your favorite heroes from the Shadow Fight universe.

In Shadow Fight Arena, you create a dream team of 3 fighters to defeat the opponent’s team.
All heroes have unique upgradeable abilities that interact with each other and can be leveled up.
Choose the right fighter to counteract the enemy’s tactic and win the battle!
Control your hero like in classical fighting and get a console-level battle experience on your mobile device.
Discover the famous Shadow Fight series of games that have been downloaded more than 500 million times.