This game has 12 reported Temporal Dark Patterns. There are 7 votes indicating the absense of a dark pattern.


2 votes
1 votes
Wait To Play -
2 / 1 votes
In-game timers that make you arbitrarily wait for something.

This game has 20 reported Monetary Dark Patterns. There are 11 votes indicating the absense of a dark pattern.


2 votes
1 votes
Pay to Win -
2 / 1 votes
A player can spend real money to purchase something that gives them an advantage in the game.


1 votes
1 votes
Anchoring Tricks -
1 / 1 votes
Placing a cheap item next to an expensive item to make it look more affordable.


1 votes
2 votes
Accidental Purchases -
1 / 2 votes
Making it easy to accidentally spend money with no confirmation or ability to undo or refund the action.

This game has 2 reported Social Dark Patterns. There are 18 votes indicating the absense of a dark pattern.


1 votes
2 votes
Fear of Missing Out -
1 / 2 votes
If you stop playing you'll miss out on something or be left behind and unable to catch up.

This game has 10 reported Psychological Dark Patterns. There are 9 votes indicating the absense of a dark pattern.

Complete the Collection reported on Apr 4, 2021

Characters get better by obtaining all possible items related to them

You can obtain popular Final Fantasy characters easily but their power is low unless you pay for items.

Characters are given depending on story level 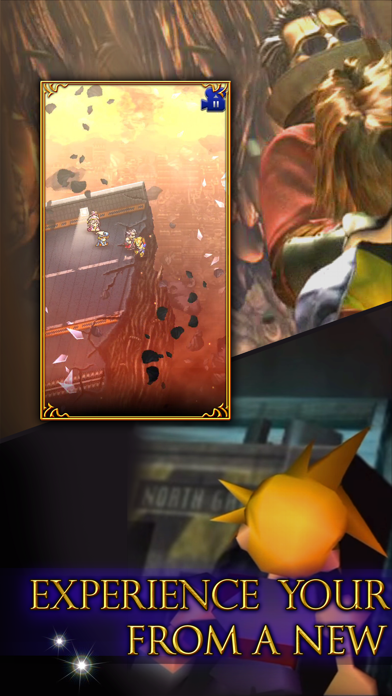 - Midgar, Zanarkand, Cocoon...the Record Dungeons contain full pixel art remakes of some of the most iconic settings in FINAL FANTASY history, enabling you to lose yourself among the Story Records of adventures past.
- Experience a whole new story with original characters designed by Tetsuya Nomura, including Tyro, Elarra, and the Shadowsmith.


Heroes from Throughout FINAL FANTASY

- Cloud, Tidus, Lightning, Noctis...the heroes who saved countless worlds. And standing against them, Sephiroth, Seifer, Kefka, and the unforgettable villains of FINAL FANTASY.
- More than 200 detailed characters await! Create your own dream party of heroes hand-picked from throughout the history of the series.


Relive the Original Stories in Battle


All Your Favorite Music in One Place

- The famed music of FINAL FANTASY stirs memories of battles in distant lands. Many of these tunes are reborn in new FFRK original arrangements.
- Visit the Music Hall to listen to your Music Records whenever you like. Then select your favorites to accompany you on your journey through the realms of FINAL FANTASY.


Multiplayer with Your Friends

- Enjoy multiplayer that supports up to 4 players. Use original stamps to communicate with your allies as you forge a strategy to work together and take down deadly foes.

- In a glorious kingdom that thrives on the harmony between magic and art, epic tales of valor and hope have been passed from one generation to the next.
- The records of these great chronicles uphold the peace and prosperity of all civilization. The kingdom sealed these records inside paintings, to safeguard the balance of the world.
- That is until, without warning, the records within the paintings began to fade away... Darkness fell upon the world, bringing catastrophe and ruin.
The time has come for you to save the kingdom’s future.

- Tyro has restored the Battle Records held in the paintings, protecting the world from a terrible threat from beyond. Now as their investigation continues, they discover an ominous magic emanating from mysterious Corrupted Paintings. But these paintings do not hold Battle Records like the others.
- These new paintings hold Story Records chronicling the adventures of great heroes from across the realms.