This game has 93 reported Temporal Dark Patterns. There are 113 votes indicating the absense of a dark pattern.


12 votes
Playing by Appointment -
12 / 0 votes
Being forced to play according to the game's schedule instead of yours.


16 votes
Daily Rewards -
16 / 0 votes
Encourages return visits every day and punishes you for missing a day.


14 votes
Grinding -
14 / 0 votes
Being required to perform repetitive and tedious tasks to advance.


17 votes
Can't Pause or Save -
17 / 0 votes
The game does not allow you to stop playing whenever you want.


14 votes
Wait To Play -
14 / 0 votes
In-game timers that make you arbitrarily wait for something.


13 votes
Advertisements -
0 / 13 votes
Forced to watch ads or given rewards for watching ads.

This game has 108 reported Monetary Dark Patterns. There are 50 votes indicating the absense of a dark pattern.


14 votes
Pay to Win -
14 / 0 votes
A player can spend real money to purchase something that gives them an advantage in the game.


20 votes
Accidental Purchases -
20 / 0 votes
Making it easy to accidentally spend money with no confirmation or ability to undo or refund the action.


15 votes
Anchoring Tricks -
15 / 0 votes
Placing a cheap item next to an expensive item to make it look more affordable.


13 votes
Recurring Fee -
0 / 13 votes
Encourages players to play as much as possible to get their money's worth.

This game has 60 reported Social Dark Patterns. There are 49 votes indicating the absense of a dark pattern.


13 votes
Social Pyramid Scheme -
13 / 0 votes
You get a bonus for inviting your friends and then they have to invite their friends.


16 votes
Social Obligation / Guilds -
16 / 0 votes
To avoid letting down your friends, you are obligated to play when you don't want to.


16 votes
Fear of Missing Out -
16 / 0 votes
If you stop playing you'll miss out on something or be left behind and unable to catch up.


13 votes
Encourages Anti-Social Behavior -
0 / 13 votes
The game incentivizes players to lie, cheat, or backstab other players to get ahead.


19 votes
Competition -
0 / 19 votes
The game makes you compete against other players.

This game has 89 reported Psychological Dark Patterns. There are 0 votes indicating the absense of a dark pattern.


17 votes
Invested / Endowed Value -
17 / 0 votes
Having already spent time and money to improve your status in the game, it's difficult to throw it away.


19 votes
Badges / Endowed Progress -
19 / 0 votes
Reluctancy to abandon a partially completed goal, even one forced upon the player.


19 votes
Complete the Collection -
19 / 0 votes
The urge to collect all the items, achievements or secrets in a game.


20 votes
Illusion of Control -
20 / 0 votes
The game cheats or hides information to make you think you're better than you actually are.

Greenhouses, inns, brewing potions and unlocking portkeys, all have timers attached to them.

You might miss an event, which typically last for a week.

When buying gold, the $20 purchase is animated and bigger than the cheaper options. Also, you get bonus gold for purchasing more.

You can only hold a certain amount of potions, ingredients and energy. You have to spend gold to increase the limits.

The appearance of rare Foundables is pretty rare and variable.

Complete the Collection reported on Aug 7, 2020

There are a limited number of Foundables. Some very very rare. The point of the game is to collect them all. Not sure if it's actually possible.

Every time you run out of energy or run out of inventory space (which is basically all the time), the game puts up a box to spend coins to get more energy/space. There is no confirmation and it's easy to accidentally press the wrong button.

You can pay money to replenish your energy. Other than visiting Inns, that is the only way to do it.

Playing by Appointment reported on Aug 7, 2020

If you plant something at a greenhouse, you must come back to the greenhouse during a very specific time in the future to harvest that plant, otherwise you lose it. 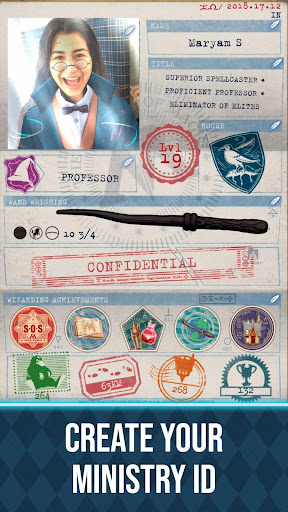 From the makers of Pokémon GO, Harry Potter: Wizards Unite is the real-world augmented reality (AR) game inspired by the Wizarding World that puts magic in the hands of players worldwide. Harry Potter: Wizards Unite is co-developed and co-published by Niantic, Inc. and WB Games San Francisco as part of Portkey Games, a label dedicated to creating new Wizarding World mobile and video games inspired by J.K. Rowling's original stories that place players at the center of their own adventure.

Realize Your Wizarding Potential
A calamity has befallen the wizarding world, causing Foundablesmagical artefacts, creatures, people, and even memoriesto mysteriously appear in the Muggle world. As a new recruit of the Statute of Secrecy Task Force, youll work with witches and wizards from across the globe to solve the mystery of The Calamity and keep magic safe from Muggle eyes.

The Magic Is All Around You
As you step outside and explore the world, the Map will reveal Traces of magic that indicate the location of Foundables. These Traces are found at various real-world locations and trigger richly detailed 3D encounters in full 360-degree advanced AR. Youll need to cast a variety of spells to defeat the confounding magic surrounding the Foundables in order to safely return them to the wizarding world. Keep an eye out for other things that will aid you on your journey including Inns that replenish Spell Energy, ingredients that can be used to brew potions, and even Portkeys that can whisk you away to iconic wizarding world locations.

Stronger United
Gather your friends to take on even bigger magical feats such as Wizarding Challenges, real-time cooperative multiplayer battles against dangerous foes. To overcome the stronger threats and discover rarer Foundables, youll need to team up and strategize with your fellow witches and wizards and specialize in different magical ProfessionsAuror, Magizoologist, and Professorthat each have their own unique skills and abilities that come in handy at different times.

Ready your wand, alert your friends, and be ready to protect the wizarding world from a global calamity. Your Wizarding adventure awaits!

Stay tuned for the latest at WizardsUnite.com