This game has 2 reported Psychological Dark Patterns. There are 4 votes indicating the absense of a dark pattern.

It's a roguelike, so every time you lose on a hard part, you have to replay all the easy parts to get back where you were. Casual mode lets you avoid this, but at the cost of not being able to get any achievements.

The only way the game ends is when you lose. The main goal is to get an Orb of Yendor, but once you get one, the game keeps going, and lets you go for a second in a row, and then a third, and so on forever, each time with higher difficulty. And there's also infinitely repeatable side quests, like collecting Holy Grails, all of which keep track of the number of completions and also get harder each time.

You can only save the game if you've picked up an Orb of Safety within the last 7 turns. This is somewhat justified for technical reasons, because the save files would have to be gigantic otherwise. Also, though, unless you're playing in Casual Mode, if you have to quit without saving for any reason, your old save is deleted, so you lose all of your progress, not just what you've done since last time you did save.

The game has a bunch of achievements, like collecting 50 treasures from given kinds of lands. Unlike basically everything else, these persist across runs.

Complete the Collection reported on Feb 5, 2022

The most prestigious treasure, Hyperstones, are only available once you've collected 10 of every other kind of treasure in the game.

There's online leaderboards to see which player has collected the most treasure, who's had the fastest time to get an Orb of Yendor, etc. 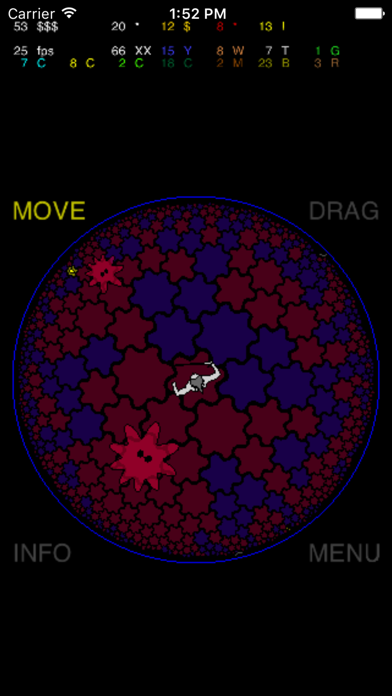 You are a lone adventurer in a strange, non-Euclidean world. Gather as much treasure as you can before the nasty monsters get you. Explore about 50 different lands, each with its own unique treasures, enemies, terrain obstacles, and mechanics which challenge your tactical and navigation skills. Your quest is to find the legendary treasure, the Orbs of Yendor. Collect one of them to win! Or just ignore your quest and collect smaller treasures.

The twist is the unique, unusual geometry of the world: it is one of just few games which takes place on the hyperbolic plane. Witness a grid composed of hexagons and heptagons, straight lines which seem to be parallel, but then they diverge and never cross, triangles whose angles add up to less than 180 degrees, how extremely unlikely is it to reach the same place twice, and how the world seems to be rotated when you do return. All this matters for the gameplay. The game is inspired by the roguelike genre (although in a very minimalist way), works of M. C. Escher, and by puzzle games such as Deadly Rooms of Death.