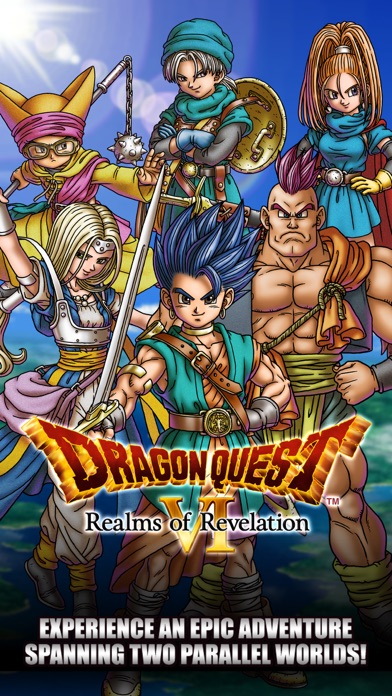 ◆Prologue
A young lad from the secluded village of Weaver’s Peak lives a peaceful life with his little sister. But all that is to change when the mountain spirit appears before him, prophesying that only he can save the world from being swallowed by darkness. And so he sets out on a grand adventure to learn the truth of his world, and that of the mysterious phantom realm that lies beneath...

This world-spanning saga can now be enjoyed in the palm of your hand!

◆Game Features
・Join forces with a band of individual adventurers!
Amass a following of faithful friends as you travel around the riven realms. From wandering warriors to amnesiac teens, a rich cast of characters will join you in your adventures, and help you to unlock the mysteries of your clouded world!

・Vocational Education
As you progress in the game, the hero and his party will gain access to Alltrades Abbey, where they can specialise in any of over sixteen vocations. Train your skills in your chosen vocation, and learn a multitude of spells and special abilities. After you have mastered an ability, you can still use it even if you change vocation!

・Converse Freely with your Fellow Party Members!
The party chat function allows you to converse freely with the cast of colourful characters who will accompany you on your adventure. So don’t hesitate to turn to them for advice and idle chit-chat whenever the urge assails you!

・360-Degree Views
Rotate your viewpoint in towns and villages through a full 360 degrees to make sure you don’t miss a thing!

・AI Battles
Tired of giving orders? Your faithful companions can be instructed to fight automatically! Use the various tactics at your disposal to see off even the toughest enemies with ease!

・The Casino
Once again, the casino makes a comeback! While away the hours trying your hand at the poker tables or testing your luck at the slot machines, and exchange the tokens you earn for all kinds of exciting items! If lady luck smiles on you, you might be rewarded with the rarest items of all!

・The Slimopolis
Unlike previous titles, where monsters could only be recruited during battle, Dragon Quest VI lets you recruit an army of lovely little slimes as you travel around the world! Once you’ve recruited a slimy friend or two, head to the Slimopolis to test their mettle in a series of arena battles, with fabulous prizes on offer for any slime tough enough to emerge victorious! Train up your slimes, and aim for the championship!

・Slippin’ Slime
The slime-sliding minigame introduced in the Nintendo DS version makes its welcome return! Brush the ice in front of your sliding slime to guide it past perilous pitfalls and obstinate obstacles. Perfect your polishing action to hit the target, and send your score through the roof!