2 votes
Badges / Endowed Progress -
0 / 2 votes
Reluctancy to abandon a partially completed goal, even one forced upon the player. 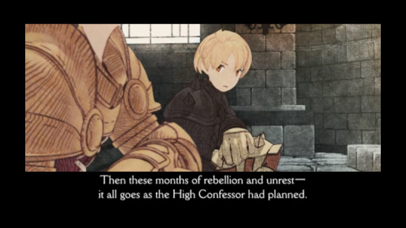 - Quick Save Warning
Due to changes to OS features, Quick Save cannot be performed in battles.

We apologize for the inconvenience and thank you for your patience and understanding.

- Quick Save (auto-save) data is erased when the game is updated. Please use the in-game save feature before updating to the latest version.

- The app requires a fair amount of memory and may not load while other apps are running. If the app does not load, please close all other apps and try again.
=====
[Version 1.2.0]

■Refined Graphics
All of the game's unit graphics have been redrawn in high-resolution. Don't miss this chance to play the sharpest, most beautiful FINAL FANTASY TACTICS yet!

■Improved Draw Speeds
The graphic drawing processes have been optimized for mobile devices. Say goodbye to choppy motion and crash bugs, and play with the quickest, smoothest abilities effects and animations to date!

■iCloud Support
A save slot which allows game data to be saved to iCloud has been added. It is now possible to migrate game data across multiple devices.

Final Fantasy Tactics: The War of the Lions has arrived for iPhone/iPod touch!

Now, in 2011 the game has finally arrived for the iPhone/iPod touch! You can enjoy the game whose story gave life to the world of Ivalice, and whose high strategy battles bring tactical games to a whole new level.


■Game features
- Intuitive Touch Screen Controls
The complex tactical game can be effortlessly and intuitively controlled by simply tapping units and menus. Gone is the old method of switching fixed map views - you can now rotate, move and change the size of maps as you please by sliding and pinching.

- Improved Loading Times
Loading times have been improved to get you into the action quicker than ever. What's more, you can even skip certain cut scenes.