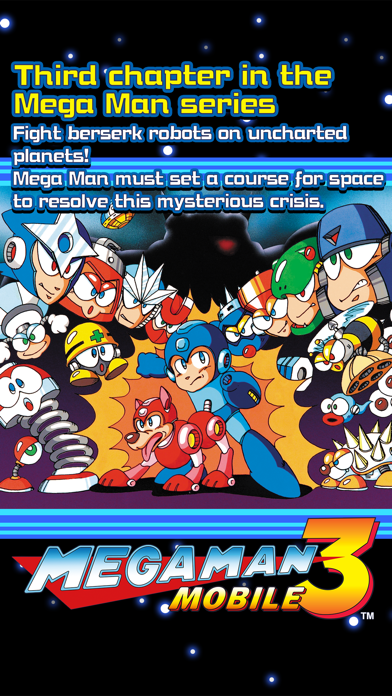 The Third Chapter in the Mega Man Saga

Defeated by Mega Man and shown the error of his ways, Dr. Wily renounces
evil and helps Dr. Light develop the massive robot "Gamma."
But all is not well: One day, the robots dispatched to eight mining planets go haywire!
Mega Man sets off with Rush at his side to uncover the cause of this interplanetary crisis!

◆New features
・"Rush," your mechanical pal
Mega Man 3 was the first game in the series to feature the now-familiar robot dog, Rush!
Built to aid in all tactical situations, Rush can transform into a jump pad, a jet, or a submarine!

・Sliding
Mega Man 3 also introduced sliding to the series.
Some narrow spaces can only be navigated by sliding through them!

Hold down + jump while playing to slide.
You can also use this technique to move quickly and dodge attacks!