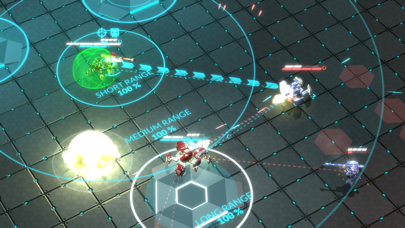 Gladiabots is a robot combat strategy game in which you carefully construct the AI of your robot squad and send them into the battle arena. Improve, refine and repeat until you outsmart all your opponents and friends online.

Features:
- Create your own AI and watch your robots execute it in the arena
- Fix it, improve it and repeat until you outsmart all your opponents
- Simple and powerful AI programming system offering millions of possible combinations (with no - programming skills required)
- Create and customize your robot crew
- Single player campaign with hundreds of solo missions
- Online multiplayer mode featuring, ranked, unranked and private matches
- 3 distinctly different game modes: elimination, domination and collection
- Create and compete in tournaments
- Asynchronous multiplayer - battle friends even if they are not online
- Sandbox mode in which you control both teams to test your tactics
- Rank up and earn points to unlock new robot skins

IMPORTANT NOTE
This game doesn't have any ads and is NOT pay-to-win!
The in-app purchases allow you to buy in-game credits that you can use to unlock new skins for your robots. They are optional, purely cosmetic and don't give any gameplay advantages.