Ridiculous Fishing - A Tale of Redemption

This game has 2 reported Temporal Dark Patterns. There are 19 votes indicating the absense of a dark pattern.


1 votes
2 votes
Invested / Endowed Value -
1 / 2 votes
Having already spent time and money to improve your status in the game, it's difficult to throw it away.

It does have some grinding, not too bad

Complete the Collection reported on Aug 27, 2019 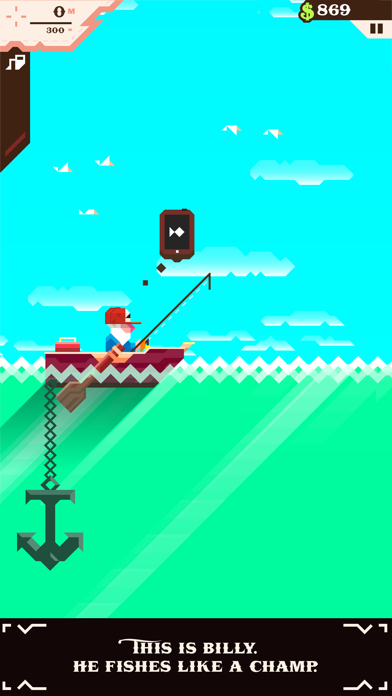 A handcrafted game about fishing with guns, chainsaws & toasters.

Follow Billy as he tries to find redemption from his uncertain past. Chase your destiny on the high seas and embark on a heroic quest for glory and gills.

* Hours of gameplay across the continents including a never-ending Infinite arcade world.
* Dozens of unlockables, weapons and items including popular fishing gear like the Most Expensive Hairdryer In The World and A Bowling Ball.
* Fish that become hats.
* No IAP - buy the game, play the game. No additional costs, no hidden fees. Even the hats are IAP-free.
* Fish that become hats.

"Ridiculous Fishing is such a complete package that it's an effortless recommendation." ~ Eli Hodapp (TouchArcade) - (5 / 5)

"Every aspect of the game, from the rewarding upgrade system to the unique graphics, displays an intricate craftsmanship we rarely see on the App Store." ~ Chris Reed (Slide2Play) - (4 / 4)

"One of the most mechanically satisfying experiences you'll ever find, and wrapped in a dazzlingly cool aesthetic." ~ Eli Cymet (Gamezebo) - (5 / 5)

"Ridiculous Fishing is from an alternate iPhone gaming universe where Nintendo is the production quality standard and action is everything." ~ Robert Ashley (A Life Well Wasted)

"I'm hooked up to an IV and playing Ridiculous Fishing. One is medicine, the other is a painkiller." ~ Ben Kuchera (PA Report)