This game has 4 reported Monetary Dark Patterns. There are 1 votes indicating the absense of a dark pattern.

This game has 0 reported Psychological Dark Patterns. There are 0 votes indicating the absense of a dark pattern.


No Psychological Dark Patterns have been reported for this game yet. Are you familiar with this game? Please review it.

Playing by Appointment reported on Nov 25, 2020 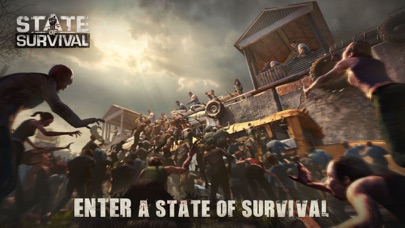 It’s been six months since the outbreak. Six months of terror, isolation and grueling hardship. Most folks didn’t make it. But you did. Welcome to the State of Survival.

The infection ripped across the country taking civilization with it. Any surviving military or government went to ground. The land belongs to the infected now. As well as any survivors brave enough to stake their claim for it.

Make friends or fight with other survivors. Do whatever you must to survive. It won’t be easy. The infected are everywhere. Resources are scarce and you must salvage what you can from the carcass of society.

It’s a new world out there. Dangerous, yes, but filled with opportunity. Immense power awaits those bold enough to grasp it. But remember to watch your back. It’s fair to say people aren’t quite as friendly as they used they be…

Rebuild
Build up your Settlement to form a safe haven for your survivors and a foundation for your post-apocalyptic empire.

Rescue
Save survivors to swell your numbers and increase your strength. Locate those with special abilities, they will be the heroes of the plague war!

Research
The zombie disease is mutating rapidly. Learn whatever you can to understand it. Whoever can control the infection controls the state!

Socialize
There is strength in numbers. Make allies and forge strategic partnerships to survive the horrors of the infected Wilderness. Join forces to pulverize any who try to take advantage of you.

Rip up the Rulebook
It’s humanity 2.0. Rewrite the rules on how you want humankind to progress.