This game has 96 reported Temporal Dark Patterns. There are 501 votes indicating the absense of a dark pattern.


73 votes
Playing by Appointment -
0 / 73 votes
Being forced to play according to the game's schedule instead of yours.


76 votes
Daily Rewards -
0 / 76 votes
Encourages return visits every day and punishes you for missing a day.


87 votes
Can't Pause or Save -
0 / 87 votes
The game does not allow you to stop playing whenever you want.


65 votes
Wait To Play -
0 / 65 votes
In-game timers that make you arbitrarily wait for something.

This game has 119 reported Monetary Dark Patterns. There are 942 votes indicating the absense of a dark pattern.


105 votes
Pay to Win -
0 / 105 votes
A player can spend real money to purchase something that gives them an advantage in the game.


66 votes
Accidental Purchases -
0 / 66 votes
Making it easy to accidentally spend money with no confirmation or ability to undo or refund the action.


98 votes
Recurring Fee -
0 / 98 votes
Encourages players to play as much as possible to get their money's worth.


89 votes
Anchoring Tricks -
0 / 89 votes
Placing a cheap item next to an expensive item to make it look more affordable.

This game has 104 reported Social Dark Patterns. There are 598 votes indicating the absense of a dark pattern.


121 votes
Social Pyramid Scheme -
0 / 121 votes
You get a bonus for inviting your friends and then they have to invite their friends.


106 votes
Social Obligation / Guilds -
0 / 106 votes
To avoid letting down your friends, you are obligated to play when you don't want to.


94 votes
Encourages Anti-Social Behavior -
0 / 94 votes
The game incentivizes players to lie, cheat, or backstab other players to get ahead.


82 votes
Fear of Missing Out -
0 / 82 votes
If you stop playing you'll miss out on something or be left behind and unable to catch up.


88 votes
Competition -
0 / 88 votes
The game makes you compete against other players.

This game has 195 reported Psychological Dark Patterns. There are 523 votes indicating the absense of a dark pattern.


82 votes
1 votes
Badges / Endowed Progress -
82 / 1 votes
Reluctancy to abandon a partially completed goal, even one forced upon the player.


111 votes
3 votes
Complete the Collection -
111 / 3 votes
The urge to collect all the items, achievements or secrets in a game.


2 votes
117 votes
Invested / Endowed Value -
2 / 117 votes
Having already spent time and money to improve your status in the game, it's difficult to throw it away.


97 votes
Illusion of Control -
0 / 97 votes
The game cheats or hides information to make you think you're better than you actually are.


91 votes
Optimism and Frequency Biases -
0 / 91 votes
Overestimating the frequency of something because we’ve seen it recently or memorably.

Completing certain modes and difficulties 'unlock' others, and I am attached to the gold trophies I've earned.

While all game features are unlockable just by playing the game, some tasks are too difficult for beginners (such as "win game in Mega Brutal difficulty using Bioweapon").

There is an option to infect your friends via Facebook

Pay to unlock genes early, instead of getting them through playing the game. 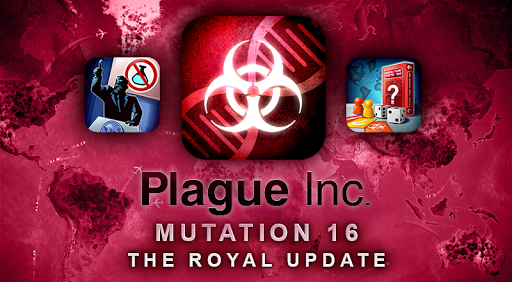 Can you infect the world? Plague Inc. is a unique mix of high strategy and terrifyingly realistic simulation.

Your pathogen has just infected 'Patient Zero'. Now you must bring about the end of human history by evolving a deadly, global Plague whilst adapting against everything humanity can do to defend itself.

Brilliantly executed with innovative gameplay and built from the ground up for touchscreen, Plague Inc. from developer Ndemic Creations evolves the strategy genre and pushes mobile gaming (and you) to new levels. Its You vs. the world - only the strongest can survive!

Plague Inc. is a global hit with over half a million 5 star ratings and features in newspapers such as The Economist, New York Post, Boston Herald, The Guardian and London Metro!

The developer of Plague Inc. was invited to speak at the CDC in Atlanta about the disease models inside the game!

The game creates a compelling world that engages the public on serious public health topics The Centers for Disease Control and Prevention
Best Tablet Game of 2012 - New York Daily News
Plague Inc. will snag your attention in all the right ways and keep it there - Touch Arcade
No denying Plague Inc.'s high-level of quality - Modojo
Plague Inc. should not be as much fun as it is London Metro
Will leave you hoping to destroy the world, all in the name of a bit of fun Pocket Lint
Plague Inc.'s gameplay is infectious - Slide to Play
Winner Overall Game of the Year Pocket Gamer
Killing billions has never been so fun IGN

P.S. Give yourself a pat on the back if you got all the themed literature references!

Special sale price to celebrate being the 15th most popular touchscreen game of 2012!