This game has 1 reported Monetary Dark Patterns. There are 10 votes indicating the absense of a dark pattern.

Certain free games have wait times between chapters. A one time purchase eliminates wait times for that game permanently.

Achievements are accessed through scenes or skill checks (like D&D). Achievements pop up when achieved during gameplay, but otherwise are viewable only by accessing the unobtrusive achievements page. Similar to Playstation or Xbox achievements. 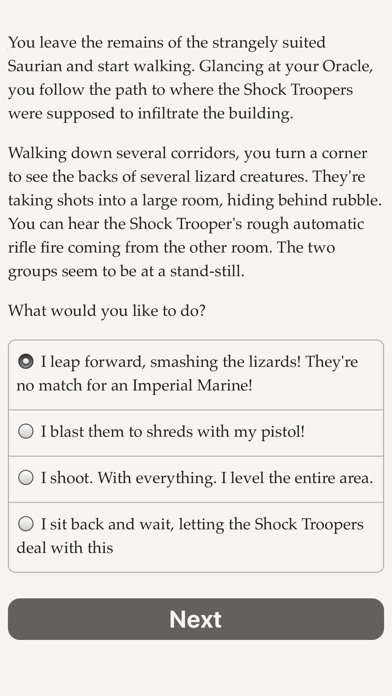 The choice is yours! Joust for love and glory, solve an eldritch murder, find romance, or battle aliens with Magitek?

"Hosted Games" is a magnificent library of interactive novels, written by authors like you. Hosted Games are entirely text-based—without graphics or sound effects—and fueled by vast, unstoppable power of your imagination.

Try a few of these fan favorites:

• The Great Tournament — Train as a squire and become a knight in order to win the great tournament
• Highlands, Deep Waters — A murderer, a cultist, and an investigator walk into a pub. Which one are you?
• Magikiras — Don powered armor and fight against terrorists and eldritch beings
• Doomsday on Demand — Face enemies and survive in the demolished district after nuclear bombings
• Imprisoned — Grab your gear and prepare yourself for a hard fantasy quest
• The Daily Blackmail — Something is rotten in City Hall—can you uncover it and...win a Pulitzer?
• Popcorn, Soda ... Murder? — A thrilling multiple-choice murder mystery
• Mobile Armored Marine: Mission to Far Hope — Blast into action as an Armored Marine, and uncover the dark secret of Far Hope
• Zebulon — Journey through space and uncover the secrets of the asteroid Zebulon
• Marine Raider — Lead a platoon of Marine Raiders to turn the tide of World War 2

Authors just like you have developed these games using ChoiceScript, a simple programming language for writing multiple-choice interactive novels. Writing games with ChoiceScript is easy and fun, even for authors with no programming experience. Learn more at http://hostedgames.org