This game has 4 reported Temporal Dark Patterns. There are 1 votes indicating the absense of a dark pattern.

You have to visit everyday to collect the games "energy" and daily rewards- it can be stressful to miss a day.

To upgrade characters, you need to collect items to do so; meaning you need to play levels over and over until you get the item you need. Moreso, to get some items, you need to play some levels on a harder degree- from Normal to Elite- which means 100% the Normal level. You can end up playing a level over and over before finally reaching Elite, then grinding even MORE to get the actual item!

You're encouraged to log in everyday to help defeat the Doomsday Machine; it can make you feel guilty to forget.

You have to wait for ships to come back, but the worst is the part that makes you wait for a ship to reach something, but if you leave then the ship may be "damaged", so you're forced to wattch and wait.

Complete the Collection reported on Dec 2, 2022

You feel obligated to collect all the characters and ships.

Part of the game relies on you to decide between races (Bajorians, Cardassians, or Jem'Hadar for example), and places emphasis on how your choice will change everything; it makes it very stressful to choose despite being pretty aubritrairy.

The game has ads showing off exclusive characters and rewards that entice you to play for longer.

The guilds, the arena area, and the rankings. 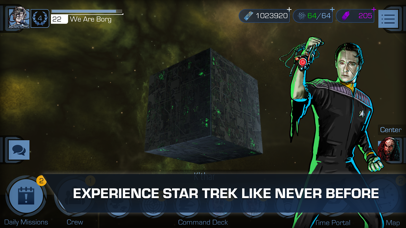 Welcome to Starfleet, Captain! Explore new worlds as you voyage through deep space.

STAR TREK TIMELINES is the ultimate Star Trek™ strategy role-playing game. Set your phasers to stun and join Starfleet on an adventure through space and time to save the galaxy from temporal anomalies. STAR TREK TIMELINES brings together heroes and villains from all of Star Trek history.

The first mobile game to include ships and characters from the new series, Star Trek: Discovery.

In STAR TREK TIMELINES you take on the role of a Captain, commanding your first starship. Create your ideal team of classic Star Trek characters in this epic sci-fi strategy RPG. Navigate the galaxy by building and upgrading ships, engaging in intense space battles and completing challenging missions. Join a fleet, explore the unknown, and gather your friends to help you take control of the galaxy!

ASSEMBLE YOUR CREW, with hundreds of characters from all the Star Trek worlds including the Original Series, The Next Generation, Deep Space Nine, Voyager, Enterprise and Discovery. Each character has their own unique skills and abilities. Play as your favorite character: Spock, Picard, Captain Kirk, Data, Worf, Janeway, Burnham and many more to choose from.

COMMAND ICONIC STARSHIPS, including U.S.S. Enterprise, Voyager, and Shenzhou, the Klingon Bird- of-Prey and Sarcophagus ships, or even the Borg Cube - the iconic spacecraft used by the Borg Collective, and many more.

JOIN A FLEET to squadron up with your friends, compete together in weekend events and collaboratively upgrade Starbases for shared bonuses.

ENGAGE YOUR ENEMIES in stunning 3D spaceship battles with exciting PvE play, or in the PvP Battle Arena where you’ll test your crew’s mettle against the best Captains in the galaxy.

EXPLORE THE GALAXY and boldly go where no man has gone before in your quests to complete your missions and build your ranking. Gain influence among a dozen factions, including the Federation, the Maquis, the Dominion, the Mirror Universe Terran Empire, and the secretive Section 31. Resolve conflicts with other factions through diplomacy and be prepared to go to war when words fail.

CLIMB THE LEADERBOARDS and win rare rewards with special-event missions.

STUNNING 3D GRAPHICS bring the 24th century to life in the most immersive and thrilling Star Trek game experience available on smartphones and tablets.