This game has 3 reported Temporal Dark Patterns. There are 2 votes indicating the absense of a dark pattern.

This game has 10 reported Monetary Dark Patterns. There are 1 votes indicating the absense of a dark pattern.

Playing by Appointment reported on Jun 19, 2022

Raids are only available at specific times.

While you can get past rewards you have to pay to get them.

Not just one, but several. Some can be exchanged (at a loss) with others, some can't.

Item upgrades can become extremely expensive very quickly but makes these items insanely powerful in both PvE and PvP.

Guilds have a castle that needs defending regularly, and there are daily events that need many players to participate.

Character progression and gear as well as cosmetics.

Opening free loot boxes takes hours to complete. Of course, you can skip the timer.

You can skip the timer for opening the free loot boxes by paying.

Some systems are so complicated it's easy to spend (more) money than you wanted just because you don't really understand what's going on. 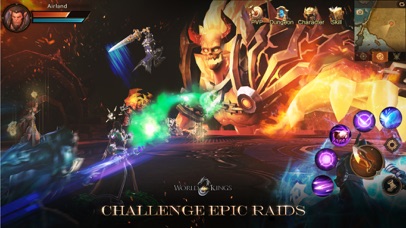 World of Kings is a 3D MMORPG masterpiece with fantastic graphics. In the massive open world, there are 4 races with distinguished characteristics, 9 classes and 27 advanced classes are available. Raid epic dungeons with global players! There are dozens of 5-25 player dungeons, and various PvP features including pushing carts, capturing flags, taking points and arena. Players could even experience guild sieges of hundreds of people.

When the shadow of the black dragon has covered the land of Tanglamia, righteous heroes are looking for a way to save the world. Open the elder scroll, reveal the secrets of the seven artefacts, take your weapon and save the world, hero!

Raid:
Dozens of epic dungeons of different difficulties;
Team of 5-25 players, fighting against strong enemies together;
Tank, healer, all kinds of DPS, every class has its different role in the team;
Gears come from dungeons loot. The harder the dungeon is, the better the loot will be.

PvP:
Real-time PvP system, experience fair battles;
Capturing flags, pushing carts, taking resources, there are various PvP features in the game;
Multiplayer-battlefield, guild siege of one hundred players, fight for honor;
PvP map with no rules, it is the survival of the fittest.

Build your own hero:
9 classes, 27 advanced classes, all with distinguished characteristics;
Hundreds of mounts and pets will enlarge your collection;
4 races, each with unique stories;
Countless costumes for you to show your character!

Massive open world:
Huge seamless map of 26 square kilometers, every corner of this huge world is accessible;
Stories of millions of words, every character has his or her own story;
Iceland, dessert, jungles, there is a complicated eco-system in this world;
Find beautiful scenery, discover hidden clues, and notice every corner of the world.

Social connection
Meeting global players to fight together;
Communicate anytime in the game, overcome difficulties together;
Join a guild and build stable stronghold hand in hand.