This game has 4 reported Temporal Dark Patterns. There are 0 votes indicating the absense of a dark pattern.

This game has 4 reported Psychological Dark Patterns. There are 0 votes indicating the absense of a dark pattern. 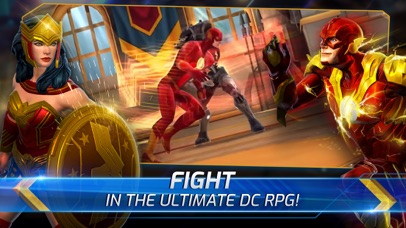 Nekron and his legion of Manhunters have launched an all out invasion to destroy the DC Universe and fulfill the Blackest Night prophecy. Collect and level up your unlikely team of Super Heroes & Super Villains to save the world in epic 4v4 combat!

(NEW!) TEAM UP WITH FRIENDS
• Join forces with friends in the all-new Alliance mode and chat system!
• Show off your winning strategy - Poison Ivy buff steals or Green Lantern energy shields? You decide!
• Earn exclusive rewards for participating in special events and challenges

COMMAND EPIC TEAM BATTLES
• Survive waves of attacks by utilizing your roster to gain exclusive rewards and characters in the new R.E.D. Alert Mode
• Immerse yourself in an exciting story mode across iconic DC locales, including Metropolis, Themyscira, STAR Labs, and more